Last spring I turned thirty, and the only thing I wanted for a gift was a spinning wheel. I actually alreade have two old ones that I've inherited, but they are bit broken and a bit tricky to spin on, and I have wanted a modern one for ages so I can learn to spin properly (nothing against old ones, but now is not the time - I will take care of them and mend them when I am a better spinner and can figure out what ails them). I got some money to buy a wheel, and started researching. Unfortunately, the tires of my car were also quickly getting worse, and in the end I had to spend the money on car wheels instead of a spinning wheel. 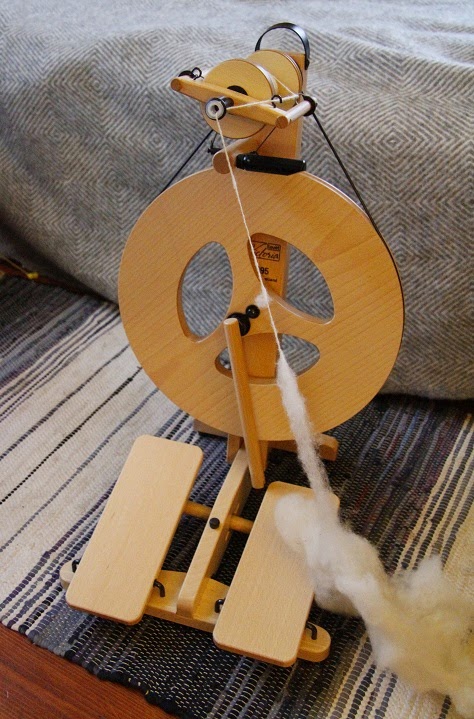 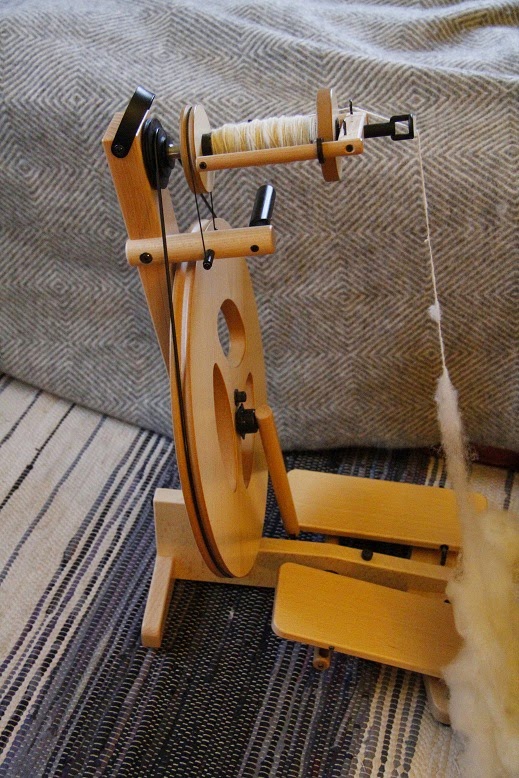 Since then I have been looking longingly at several nice wheels, and mostly at Louët Victoria, which is very small and portable, which is good since I have very limited space. This monday I decided I could not wait no more, and ordered it off the internet (from Ullbutiken i Råda). I expected it to take a week or so, but already on wednesday I got a text that the wheel could be fetched from our local post place! Incredibly fast delivery!

I went there and picked it up, and then I spent all evening getting to know it better. It unpacked verly easily, and I could start spinning in five minutes. I had lots of finely carded swedish finull (a very fine and supersoft wool from a nordic heritage breed called 'finullsfår') that I originally bought for felting, but now I started to spin it. I am not an experienced spinner, and have mostly spun longer fibers before (the finull is said to be close to a merino in fiber length), but it worked allright on the Victoria!


Now I simply can't stop spinning! I sat up late at night when I got the hang of it, and yesterday morning I set the alarm early so I could spin a little after breakfast..

Yesterday I wound off my first skein of handspun from the new wheel! I can not really control the fiber thickness yet, and in some places it is quite overspun, but I am so happy! Now I have sleep troubles because I can't stop thinking of all the handspun knitting and weaving I will do in the future :)). When I know the wheel better, I will publish some sort of review, but for now.. Spinning!

Posted by Elin at 07:57 Inga kommentarer:

A little something about weaving

Most non-weaving people I meet seem to believe that weaving is extremely hard and that it is extremely slow work. Even people who do other kinds of textile craft keeps telling me weaving seems soo technical and mathematic and scary and what not. I don't agree!

OK, weaving is technical, and you need some space and equipment - but it is one of the most awesome crafts-  so if you have access to a loom- do try! In its basic form weaving is definitely not harder than any other craft. Sure - setting up a weave can be tiresome and time consuming (I actually like it, but I don't do it for a living..), but weaving is like meditation! And compared to knitting - weaving is quick once you are set! The shawls (each 0,5 m by 2 m) in the picture took approximately six hours to weave each.. compare that to knitting!

In Capellagården, a lot of the first year education is focused on weaving. You get all the basic knowledge about setting up a loom, calculating yarn weight, basic weaving techniques and so on. I, and most of my fellow classmates were almost complete weaving rookies when we started, but the learning was quick. After a month or so, every one had woven their first rag rug (trasmatta), and around x-mas, we were weaving shawls.

Now I'm in second year at Capellagårdens textile program and the students set a lot of our schedule ourselves. Some people dig deeper into certain weaving techniques, other search for the perfect fabric quality, and some don't weave at all. I have chosen to focus my second year on natural dyeing, pattern design and learning different textile print techniques, but I still want to have a weave going at all times if I have the time. Mostly I weave shawls (I am a shawlomaniac..), all in wool.

Currently I am working on a big shawl in a technique called "Sållväv" (I don't know if there is an English term for it but it is a simple four shaft weave) traditionally used in linen towels. I am using wool instead, and I can't wait to finish it so I can cut it down and wash it and see if the weave will shrink funny or not :). In the old towels the effect after wash is quite bubbly, and it would be fun if my weave also turned out that way. We'll see!

Hi, I am Elin, I live in Sweden and I have a textile life!

My preferred textile activities are knitting, weaving, printing, dyeing and spinning, but sometimes I sew (badly), sometimes I crochet and sometimes I do ..other things.. I'm up for most crafts really, as long as they are intresting. I love the process of making, and in this blog I will try to share that love with you. Here comes my textile thoughts, pictures, patterns, ideas and experiments.


Some short personal facts - I was born in 1984, grew up in the Swedish countryside, county of Värmland, and have since then moved around a lot in southern Sweden. I have a MSc in Conservation Biology and I work with nature conservation. However, these past 2 years I have been on leave from work to attend the two-year textile course at Capellagården, Öland- a life long dream come true! In the future I hope to work part time with textiles in some way.


You can also find me on instagram: @elinakelius and ravelry: anura
Feel free to comment! Comments in Swedish will be answered in Swedish.

And for the swedes - I used to blog about textiles in Swedish, but decided to start a new international blog life after getting to know more and more non- Swedish speaking textile lovers.
However, - you can find my old posts here : Ur ett insnöat liv...slöjden.
Posted by Elin at 17:03 1 kommentar:

My name is Elin and I make textiles. I also love nature more than the average person and I enjoy a good cup of tea.
Textile is my homeground, but really, I'm up to most things crafty, if it is inspiring enough.